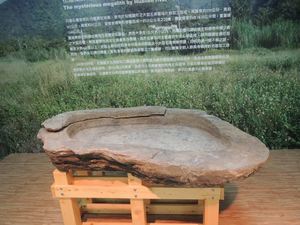 1. The stony troughs can occasionally be seen in the prehistoric ruins of Eastern Taiwan; however, they are mostly smaller in size (ca. 1 m). Yuemei Stony Trough is a rare prehistoric artifact that is large in size. This cultural legacy is very important and of great preservation value.
2. As this type of rock is mostly found in the Central Mountain Range, which is at least 4 km from the Yuemei remains, the way prehistoric people obtained the rocks and the reason why they made such a megalithic object remain a mystery.
3. The dented walls of the stony trough clearly show marks of chiseling during the production and repair, from which we can understand that prehistoric people had wonderful stone processing techniques; we can learn about the prehistoric people’s craft techniques and interactions.