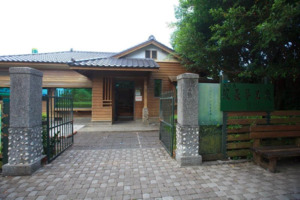 Originally, “School Heads' Dream Factory” was the “Official Residence of FengLin Branch Government Chief”. It was later turned into the dorm house of FengLin Secondary School head. The building was a Japanese-style wooden structure. After renovations, the building was renamed School Heads' Dream Factory in 2004 to honor those school heads that had dedicated decades of their time to the education by preserving the dreams of about 90 school heads born in FengLin – aka“the hometown of school heads” in the country. It is hoped that through the establishment of this facility, their dreams and the studious climate they help built can be preserved and passed on to the generations to come. Education is the foundation of a nation. Because of the studious climate, FengLin has become a town with rich culture and produced lots of talents. With the promotion of cultural education by the central government, FengLin, also known as “the Hometown of School Heads”, hopes to be able to preserve its simple and studious social climate in a time of speedy information circulation and the prevalence of culture piracy, and provide a space for the youth to learn and exchange their experiences, whereby the correct values can be cultivated among the public and the young talents can receive the necessary support.

Many FengLin natives have devoted their lifetime to the education in Taiwan. Up to now, the number of FengLin natives who have served as school heads have reached 86, making FengLin the small town in Taiwan that produces the most school heads. The facility used to be “the Official Residence of FengLin Branch Government Chief” but was later turned into the dorm house of FengLin secondary school heads. After renovations, the dorm house was renamed “the School Heads' Dream Factory” in 2004. Why it is called a “School Heads' Dream Factory”? Because a factory is a place where products are produced. But the difference is, the products produced in this factory are “the dreams of education”. “School Heads' Dream Factory” is to preserve the records of those school heads’ long-time dedication to education. It is hoped that through the preservation of their educational dreams, their good examples can inspire more young people and their dreams will come true in the future.

”FengLin School Heads' Dream Factory” was established based on this idea to expand students' learning space beyond schools and classrooms under the policy of the diversity education development. Through an open reading space, it is hoped that “School Heads' Dream Factory” can serve as a living classroom with educational value to inspire students. A series of exploration activities held will become students' living teaching materials. Currently the facility is managed by FengLin Township Office. The plan has won the support from culture and history workers such as retired and incumbent school heads, teachers, civil servants, enthusiasts, Women's Association, FengLin School Heads Club, etc. Now, “Culture and History Association” has been set up to take over the operation of the facility. Furthermore,” the Team of Culture Volunteer Workers” was also formed to facilitate all kinds of related works to achieve the sustainable operation of the facility without increasing any economic burden on the township coffers.