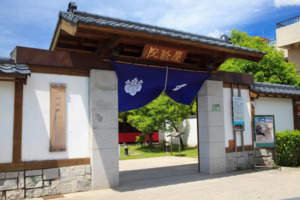 1. Guided group bookings available with prior arrangement
Groups of more than 20 people can phone to book a guide
2. Cultural souvenirs available for sale

A brief introduction of the facility：
ChiAn ChingHsiou Temple used to be Shingon Yoshino Dojo in the Japanese colonial period, where KongHai Great Master and Acalanatha were enshrined. It is the best preserved Japanese-style temple in eastern Taiwan. The main temple building is wooden structure with a Japanese-style four-pillar rooftop. The temple was rebuilt in 1945 and renamed ChingHsiou Temple. In 1997, it was designated as a third-class historical site and was renovated and re-opened in 2003. The temple is permeated with the spirit of Zen and is an important historical site and tourist attraction.

“Shingon Yoshino Dojo”was established in the 6th year of Taisho Period. It was taken over by Mrs. Wu Tian-Mei after World War II and was renamed “ChingHsiou Temple”. After change-hands for several times, the temple was left in a dilapidated condition. It was not until April 1997 that the temple was designated as a third-class historical site, and was re-opened to the public on November 29, 2003 after renovations. The important historical items preserved in the temple include shrines, the stone sculpture of Acalanatha, Baidu Monument, 88 stone statues of Buddhist Gods and so on.

Now ChiAn ChingHsiou Temple has been listed by the HuaLien County Government as a historical site. Part of the temple's structure has been renovated and reopened to the public in November 2003 by the Cultural Affairs Bureau, HuaLien County. It is hoped that ChingHsiou Temple can be developed into a “Japanese-run Immigrant Village” to revive the culture of the Japanese immigrant village. In addition to the daily maintenance and management work and guided tour service, other activities like disaster prevention drills and various kinds of promotional activities are also been regularly held for the temple.