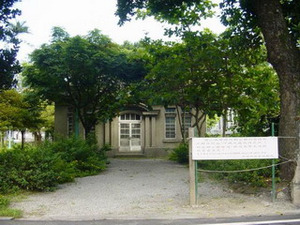 A. The construction is an important proof of the beginning of forestry industry of Taiwan under Japanese Colonial Period and the development of Hualien area.
B. ‘Forestry Corporation’ is a Japanese-Western hybrid construction. It adopted the wood-framed truss, washing finish of stucco, Y-shaped colonnade of eaves, and special Japanese tiles and so on architectural types of historic constructed materials , which were often used in the mid of Japanese Colonial Period and have technique values. Moreover, Southeast Asia plants (such as big Ye Ren, King coconut and so on ) were widely grown in the garden, which formed significant garden features in the Japanese Colonial Period. The construction is meaningful in terms of preserving the architectural characteristics of Japanese-Western hybrid construction.
C. The archway decorations of the porch and the two pillars standing in front of the gate are the images of a public construction. Moreover, the construction is in a good condition and so are its surroundings.