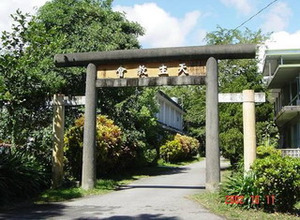 A. Xincheng Village used to be comprised of Atayal and Amis. In Japanese Colonial Period, the Japanese army had attacked the native Taiwanese residing in Taroko for several times, resulting in the tense of relationship between both sides. In December of 1896, an indigenous girl was assaulted by a Japanese soldier. In order to get even, local native Taiwanese attacked and murdered 13 Japanese soldiers. The event was named the Xincheng Tragedy, which later leaded to the breakout of Taroko Attack in 1914. Xincheng Tragedy was the first rebellion of Taiwanese against the ruling of Japanese government.
B. After the Xincheng Tragedy, the Japanese army built a Shinto Shrine here to memorize those sacrificed soldiers in 1914. There were wood-framed construction, Torii, memorial, and Santo in the shrine. Later in 1937, they re-built the shrine with cement at the same site. The two Torii were made of cement and steel and decorated with washing finish of stucco. Tamagaki, fences separating the world of human and the sacred, surrounded the Shinto shrine. Moreover, eight stone lanterns stood erect along with the two sides of Santo. Visitors may find two pairs of stone Komainu(lion-dogs) guarding the shrine, a granite pool (is inside a church now) designed for purification before worship, a Temizuya (a Shinto water ablution pavilion and is a gazebo now), and a memorial inscribed (is placed in the garden in front of the church now) with names of sacrificed soldiers. The statue of Virgin Mary takes the place of the memorial in the shrine nowadays and is called the garden of holy virgin. Several old Japanese Black Pines heighted more than 10 meters were grown in luxuriance here in the garden, making it a serene, refined, and aged historic space.