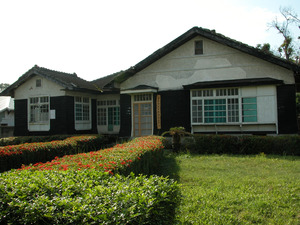 The construction used to be the official residence of a high-rank commander of Hualien, Colonel Nakamura, in Japanese Colonial Period. The place is a traditional Japanese style building, with wide corridors and single-slope cement ditches around the residence. Moreover, the layouts, ‘single-storey’ and ‘double-unit,’ are both features of the colonial period. The residence is an important proof of the development of Hualien. On the other hand, the official residence was constructed by Meilun River next to Meilun Mountain and has become a key tourist attraction in Hualien City. Though the residence was built in Japanese Colonial Period, it had adopted the architecture technique that integrated with local environment. Moreover, enclosures and bolt of the residence remain the same as they were in 1930. Though the interior part of the residence has experienced slight alteration, its appearance and main structure are preserved well, and so are the surroundings. On the other hand, its layout is different from the Japanese style residences seen in Taipei, Taichung, Tainan, and western plains, making the place a valuable unique construction on the island.