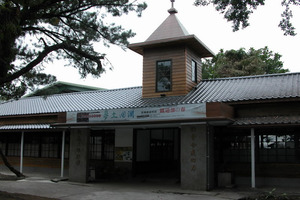 In 1908, the Japanese Diet approved the construction of Eastern Hualien railway and road, installed the「ChuZhangSuo, Hualien Harbor, Railways Ministry」 responsible for Taiwan’s eastern railway, road engineering, operation and management…etc., and allotted funding directly to the 「ChuZhangSuo, Hualien Harbor, Railways Ministry」, funding did not through the government house then, so its rank equaled to a small Ministry of Communications in Eastern Taiwan. During newly established in 1909, its surrounding with organizations of the Transportation Section, Public Work Section, Maintain Section, Electricity Section, Police Section…etc., just liked a small Railway bureau, it achieved opportunities of civilization development in Eastern Taiwan.

Office building of the 「ChuZhangSuo, Hualien Harbor, Railways Ministry」completed in 1910 (no textual research for its architectural form, the existing wooden building was converted in 1932), area about 3,758.8 square meters, the overall architectural style is a quadrangle shape Japanese office building yet main hall roof with style of the western minaret. On Mar. 1, 1988, the Hualien Management (the former「ChuZhangSuo, Hualien Harbor, Railways Ministry」) was dissolved into history. The old Hualien railway station and its surrounding facilities were moved to the western of Hualien city at that time. The most prosperous commercial district among territories of Hualien and Taitung was depression gradually also.

In 2002, by endeavors of the Cultural Affairs Bureau, Railway Bureau, many cultural workers, academics, and local communities and citizens… etc. for preservation and regeneration of the 「ChuZhangSuo, Hualien Harbor, Railways Ministry」, it was included in the registry of historic buildings in Hualien county and carried out emergency rescue, literature surveys, hardware repair, re-use planning and personnel training…etc. In 2003, continued to include its peripheral facilities “water tower of steam locomotives” and “Director home” in the registry as historic buildings and planed to promote the steam locomotives; in 2005, continued to include the peripheral “old Hualien Public Work Section” and “old Hualien Police Section”…etc. in the registry of historic buildings so that the territory of the old Eastern Railway base site even more complete, also won supports of the Government of Hualien County, Hualien City Hall, Railway Burear…etc. to plan on repairing the front fountain of the old railway station, railway corridors and the heart of HuiLan—such as Solar City project, chained up these railway landscapes just like a pearl necklace.