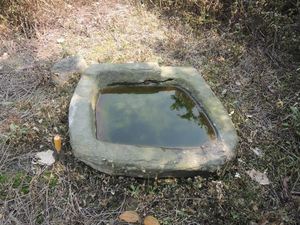 Single stony troughs are the giant rock relics of the late Neolithic Age, found only in the northern Coastal Range of Hualien County. So far, the only known sites are the Yuemei and Fangliao Troughs. The Yuemei remains belong to the Huaganshan Culture and the Fangliao ruins, to the Qilin Culture. Although the two stony troughs belong to different prehistoric cultures, their crow-flight distance is merely 15km, proving the intimate interaction and relationship between two cultures. Fangliao Stony Trough is the only one remaining in the ruins and fairly well-preserved. It is a rare and important large piece of historic artifact.
Registration Purpose: Fangliao Stony Trough is made of schist, which has sheet-like grains. As the way to effectively cut schist into the ideal and required shape was rarely seen in the artifact study of the prehistoric period, the information regarding the particular craft technique may be obtained by conducting research on Fangliao Stony Trough. Fangliao Stony Trough is an important relic of the Qilin Culture and a valuable witness of the Neolithic Age.