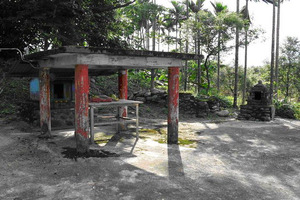 Address:  On the mark 77.5km of County Highway 193; at the foot of the western slope of the Coastal Range, Fuxing Vil., Ruisui Township, Hualien County 978

Reasons for registration:
A. The architecture is the simplest type of Land Deity Temple, composed of thirteen stone plates. The front door and the ridge delicately carved, making the temple culturally valuable.
B. The temple witnessed the immigrants of Mingnan migrating from the western side to the eastern coast on the island, making the temple historically valuable.
C. Though the temple collapsed due to the earthquake in 1951, it has been removed to another place for reconstruction. Except for the base, the other parts of architecture remain the same, making the temple a living proof of earthquake.
D. The temple is functionally meaningful in terms of religion, history, humanity, culture, and the community.
E. The temple is a spiritual icon for regional immigrants.