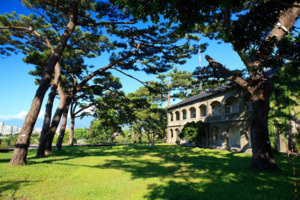 Located on the tableland to the south of MeiLun District at the north-eastern corner of HuaLien City, the Pine Garden overlooks HuaLien City and the estuary of MeiLun River. Outside the Pine Garden, there are a dozen aged pine trees. The natural ecology and the marks left by times have become the unique features of the garden. The combination of various artistic activities has further turned the garden into a space for art and literature exhibitions and performances, setting a good example for museums’ innovative operation. Since the operation of the garden's being contracted out to Art Source Co., Ltd. in 2006, “culture innovation and value-added arts” has become the core value of its management. “The Pacific Poetry Festival” held in November every year has been serving as a platform to bring together the heavyweight poets and writers from at home and abroad. The Pine Garden is aimed at becoming the only “Museum of Poetry” in Taiwan.

The Pine Garden is the Japanese military structure that is best preserved in Taiwan. The structure is made up of four buildings. The construction of the two-story western-style main structure adopts “eclecticism” and was built with bricks, wood, concrete and steel. The so-called eclecticism refers to the adoption Baroque style by the main structure with arcades on 1st and 2nd floors and covered with a Japanese-style tile rooftop. In short, eclecticism means an architectural style that combines both eastern and western touches. The Pine Garden is a two-story building facing southeast. In addition to its military purpose and public affairs uses, there are other facilities in the building such as kitchen, cookhouse, laundry room, bedroom, etc. The main building is a reinforced concrete structure. While the building behind the main structure is a Japanese-style wooden house. Due to years of dilapidation, the house was seriously damaged. In the eastern side of the garden, there are two annexes, one of which is a wooden gate house, and the other is a concrete structure facing south. In the back of the Pine Garden's main structure is a wooden public dormitory house.

After World War II, the garden was taken over by the KMT Government. In 1947, the garden was under the jurisdiction of the Army Headquarters as the physics and chemistry laboratory of Army Engineering School. Later it was changed into the base of American Adviser Corps. After 1977 when the US severed diplomatic ties with Taiwan, the garden was taken back by National Property Administration. In 1978, the garden was handed over to Veterans Affairs Commission. In 1996, Veterans Affairs Commission planned to sell the garden as “hotel construction land” but was opposed by many local residents. On 13 July 2000, the HuaLien County Government designated the garden as “A District with Special Historical Features”. In 2000, Driftwood Decoration Exhibition organized by many artists took place at the garden. On 20 December 2001, the garden was selected as one of the historical architecture on the list of “the 100 Historical Sites in Taiwan”. In the same year, it was selected by CCA to be included in a pilot scheme for the reutilization of idle space. In January 2002, D.Z. Architects & Association was commissioned by the HuaLien County Government with the design and planning of the garden, while the HuaLien County Government's Cultural Environment Creation Association was responsible for the organization of activities and the participation of the public. In September 2003, the management of the garden was contracted out to HuaLien and Eastern Taiwan Culture Foundation by the Culture Affairs Bureau of HuaLien County. In the same year, starting with 2003 HweiLan International Artists Workshop, the garden began to move toward the public space development centered on art and literature activities. Now, the Pine Garden has become a platform for the exchanges among the artists at home and abroad. The art and culture activities of this like have also breathed new life into the garden. Since the operation of the garden was contracted out to Art Source Co., Ltd. in 2006, “culture innovation and value-added arts” has become the core value of its management. “The Pacific Poetry Festival” held in November every year has been serving as a platform to bring together the heavyweight poets and writers from at home and abroad. The Pine Garden is aimed at becoming the only “Museum of Poetry” in Taiwan.

The unique features of the Pine Garden:
Each pine tree in the garden looks like a century-old green umbrella unfolded on the blue coast under a quiet sky. To prevent the pine trees from infected with pine wood nematode, Agriculture Bureau administers pesticide every two months. In addition to pine trees, there are many other native plants like macaranga, fern, silver grass, banyan, etc. Among them, the view of ficus superba whose tree trunks twist together is the most impressive. The branches of the banyan trees penetrate the concrete walls and continue to grow inside the building. The aquatic plants pond in the back yard is full of life. The beauty of the Pine Garden lies in the combination of its natural ecology and historical space, which has also constituted a unique style for the garden.