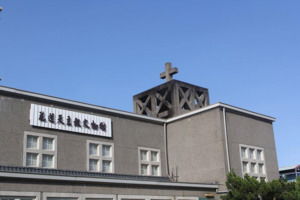 1. Guided tours of Catholic history and culture in east Taiwan.
Only open to groups, please phone in advance to make arrangements.

Located on Zhongmei Road in Hualien City. The museum has records and collections of religious and historical artifacts of the past 60 years from Taiwan's eastern regions.
The former "Meilun Cathedral" it was founded on October 7, 1958. Before the development of the Meilun area, it was the tallest structural landmark in the area. It was also an important center of Catholic mission work in Hualien and Taitung.
The majority of Hualien and Taitung residents in older times were indigenous peoples. As they were often situated in faraway and hard to reach locations, they lacked medical and educational resources. The Catholic clergy from foreign lands went to these remote tribes and brought them living resources, established medical organizations, and even learned indigenous languages to further immerse themselves in the local culture. They also compiled Catholic scriptures and hymnals in local tribal languages.
Due to the long-term dedication and determination of the Catholic clergy, many indigenous people began to accept these completely different foreign faces into their midst and converted to Catholicism.
Back then the Catholic priests took many photos of indigenous peoples in the Hualien and Taitung regions. From these photographic records we can see the genuine appearance of these indigenous peoples.
As many as 90% of believers in the Hualien Diocese were indigenous locals, so the church decor, ornaments and priests robes all had traditional indigenous tribal patterns, carvings or artistic elements. It was the most vibrant and unique diocese in Taiwan.
The current Hualien Bishop Huang Chaoming began the collection and preservation of Catholic artifacts in order to preserve these precious and unique items as well as the photographs and manuscripts of the priests. In 2010, the disused Meilun Cathedral was converted into the Hualien Catholic Museum to provide the public a glimpse of this unknown developmental history of the eastern regions.