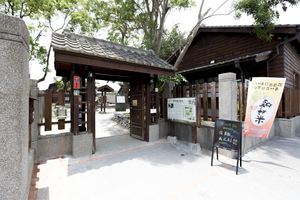 Formerly known as the Hualien Harbor Branch Office of the Railway Department, it used to be the headquarters that controlled the Hualien–Taitung Line in the old days. After the Branch Office was renovated, it was turned into a diversified cultural and recreational park and is recognized as the basis for revitalization and reuse, giving new imagination and ideas to the space. The area was combined with the nearby Old Hualien Construction Section, Police Section Martial Arts Hall (Budokan) of the Railway Department, Steam Train Water Tower, Planned Site for the Reopening of Steam Train, Railway Tourist Shopping District, and Director Dormitory to become an integrated Railway Cultural Park, creating a new style of railway architecture.

The Railway Cultural Park is famed for its most well-preserved relics of narrow-gauge railway base in Taiwan. Its views are entirely different from those of the Western line. As the base is located in downtown Hualien City, the convenient transportation is readily available, which in the future will become the hub for the promotion of the cultural tourism industry in Hualien County.